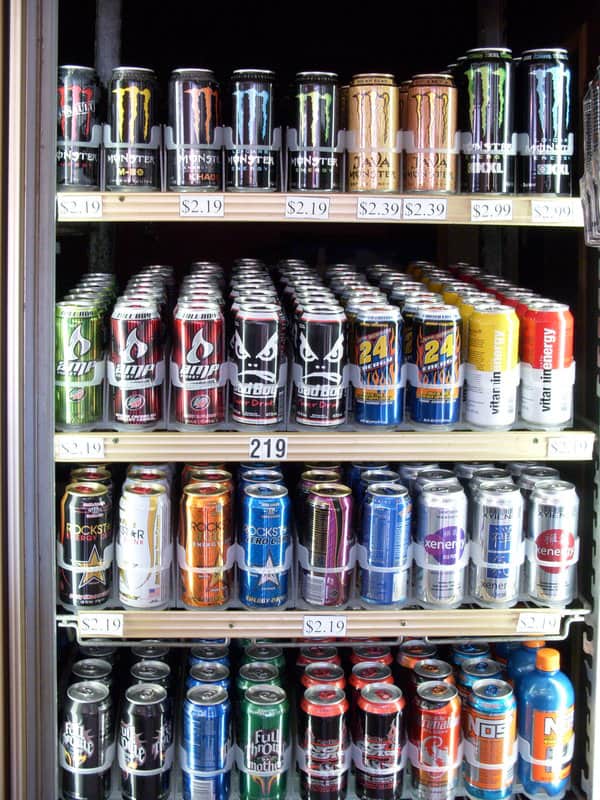 As a vegan, you’ve had to give up traditional coffee, since you can’t have the milk in this energy-boosting beverage. If you’re an SOS-free vegan, you don’t even add sugar, creamer, or milk to your coffee. When you need a jolt, where can you get it? Are energy drinks vegan?

Energy drinks can be vegan, but they aren’t always. It all depends on the ingredients and where they’re sourced from. For example, the classic Monster Energy Drink contains L-carnitine and taurine, two amino acids. You can either get these acids through industrial synthesizing or from red meat. If it’s the former, the drink is vegan. If it’s the latter, then it wouldn’t be.

In this article, we will talk more about the tricky line you must tow if you want to sip on an energy drink as a vegan. We’ll also share some alternative products that we know for certain are vegan. You won’t even miss coffee!

As we said in the intro, pertaining to whether energy drinks are considered vegan, the answer is maybe. Why so much ambiguity? To answer that, let’s look at the drinks in the Monster Energy line. Everybody knows Monster Energy, as they’re one of the best-known energy drink brands. According to Globe Newswire, the company brought in $946 million in net sales for the first quarter of 2019. They’re very much still a major player.

VegFAQs looked at the collection of beverages in the Monster Energy family and assessed whether they’re vegan. These include the Java Monster, Juice Monster, Monster Hydro, Monster Ultra, and classic Monster Energy.

Also, the natural flavors sourced for the classic version of this energy drink could have plant or animal origins. Even Monster themselves told VegFAQs that, while their beverages don’t contain animal by-products, they’re also “not vegan certified.”

Java Monster is a type of coffee beverage. One look at the ingredients should tell you that you can’t drink it. Not only does it contain the dicey taurine, but it’s got coffee and reduced fat milk.

For more flavor with your energy drink, there’s Juice Monster. This has such tastes as Mango Loco and Pipeline Punch. While it depends on the flavor you pick, the drinks in the Juice Monster line have color added as well as sugars. VegFAQs mentions this sugar can be sourced from cow bones in the form of bone char. Does that affect the vegan status of this drink? Not technically, no, but it might not be something you’re comfortable with.

Also, we have to note that while Juice Monster does contain L-carnitine, Monster themselves have said it’s plant-based in this instance.

Next, we’ve got Monster Hydro, which has four flavors. These are Tropical Thunder, Mean Green, Manic Melon, and the Zero Sugar variety. Monster says the natural flavors and taurine in the Monster Hydro line are derived from plants, not animal sources. Also, there’s no L-carnitine in this drink. That makes the Monster Hydro as vegan as any Monster energy drink gets.

Last but not least, we’ve got Monster Ultra. You can choose from six flavors, and production methods vary from country to country. The European version of Monster Ultra Red, one such flavor, uses carmine, also known as E120. This comes from insects, disqualifying it as a vegan drink. Ultra Blue is okay to drink, though, and E120 is not used in the United States for Monster Ultra.

In fact, Monster themselves confirmed that the natural flavors, L-carnitine, and taurine are all plant-based for the Monster Ultra line in the US. That makes it another vegan drink, but only in that country.

Which Energy Drinks Are Completely Vegan?

Monster may produce energy drinks that are mostly vegan, but who wants to take their chances? Not you. Luckily, you have plenty of other options. These include traditional energy drinks as well as kombucha and even some vegan coffee.

The Rockstar Zero Carb beverage, although very high in caffeine, is declared vegan through PETA. It does contain L-carnitine and taurine, but they come from plant sources.

You may also try the Power Dream Soy Energy Drink, which comes in such flavors as X-Treme Chocolate and Java Jolt. Do watch which flavors you choose, as the Java Jolt has coffee as a main ingredient. That said, there’s no L-carnitine or taurine here.

The flavors in the Sambazon Amazon Energy line include Low Calorie Blood Orange Acerola, Original Acai Berry, Jungle Love Acai Berry Passion Fruit, and Low Calorie Acai Berry Pomegranate. These energy drinks use vegetable and fruit juices for colors, so there’s no need to worry about those types of ingredients. The other ingredients are mostly organic and fair-trade. Finally, a vegan energy drink you can feel good about!

Another vegan coffee comes from Rise Brewing Co. Their Nitro Cold Brew Coffee Oak Milk Latte uses oak milk, just like Chameleon’s. Organic ingredients go into the making of this coffee as well, and the oat milk doesn’t contain any added sugars, either.

How Can You Be Sure Your “vegan” Energy Drink Is Really Vegan?

What if there’s a questionable ingredient or two on the label of your energy drink? Should you still buy it? We would advise you not to unless you want to risk potentially falling off-track as a vegan.

Instead, it’s much better to hold off on purchasing, go home, and reach out to the beverage company directly. Whether you call, send a Facebook message, or shoot an email, ask about the ingredient you’re curious about. Most companies should be happy to answer questions of this nature.

If you get the answer you wanted, that your drink is vegan, then proceed. Otherwise, try the products we recommend in this article instead.

Everyone could use a kick to help them out of an energy slump from time to time. If you’re a vegan though, what drink do you reach for? Coffee has milk and sugar, so energy drinks seem like the most natural choice. Still, whether these are vegan is up for debate. Some ingredients are, some definitely aren’t, and others could be.

We suggest you read the ingredients list carefully before assuming you can sip any ol’ (vegan) energy drink under the sun. Good luck!