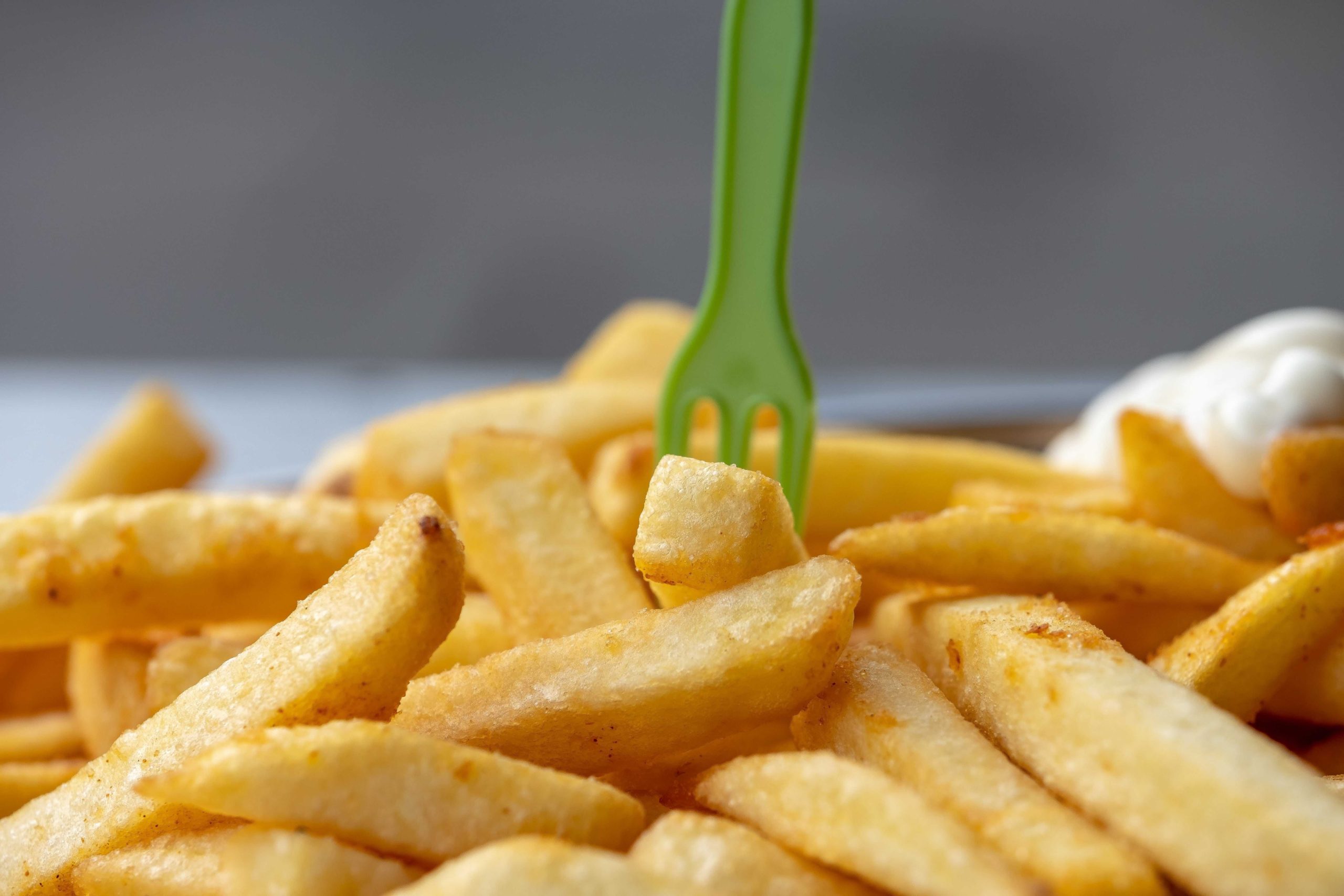 Mmm, French fries. Who doesn’t love those long, crispy, golden brown delights? Since you’ve become vegan, though, you’ve monitored your diet very closely. You want to stick within the parameters of veganism, but you’re craving fries hardcore. Can you eat them? Do they provide any health benefits at all?

Many French fries are in fact vegan, but there are exceptions, such as McDonald’s fries. As for whether fries are healthy, they’re definitely not. A study from 2017 in The American Journal of Clinical Nutrition found that if you eat fries more than two times every week, your chances of dying increase ( they’re “more than doubled”).

In this article, we will talk all about the humble French fry, including what makes it vegan, why it’s so unhealthy, and if you can make fries that are just a little bit better for you. You’re not going to want to miss it!

As we said in the intro, in most cases, yes, you can consider French fries vegan. That’s because fries are really only potatoes that get deep fried in an oil, typically vegetable oil. The smoke point of vegetable oil, which is 453 degrees Fahrenheit, is a lot higher than other oil types. For instance, virgin olive oil has a smoke point of 428 degrees and extra virgin olive oil 331 degrees.

With so few ingredients, then, vegans can safely eat most French fries. We keep saying “most” because there are exceptions. For instance, to make their famous fries, McDonald’s uses beef fat. That’s not exactly vegan-friendly. You’d want to avoid getting fries as a side dish if you’re eating at this fast food joint. Other similar fast food restaurants don’t do the same, though.

If you’re a salt, oil, and sugar-free or SOS-free vegan, then you won’t want to eat fries at all. The salt that’s included in the fry prep process would go against your diet. Plus, fries can contain hidden sugars, up to 0.4 grams for a medium serving of the spuds from a fast food joint then. That’s not much, but it’s still something to avoid as a SOS-free vegan.

What if you’re looking for some vegan condiments to dip your fries into? PETA compiled an exhaustive list you should check out. Here’s some of the products from that list you might choose as a fry accompaniment:

Why Are Fries So Unhealthy?

Fries may be vegan, but not all vegan foods are necessarily good for you.

It’s not the potatoes themselves in this case. It’s all the salting and deep frying they go through to become skinny, golden brown, and even more delicious.

In the intro, we linked you to a study from The American Journal of Clinical Nutrition. This study came out in 2017, but it was in the making long before that. The researchers followed people for eight years who ate fries. These adults were all older and included 4,400 people in all.

Despite how much alcohol the respondents consumed, whether they smoked, how much physical activity they engaged in, and even whether they were obese, the results didn’t change. Those who indulged in their fry habit two or more times every week had a higher chance of death compared to those who didn’t.

The researchers were careful to say that eating more potatoes doesn’t cause the same health risk. It’s only fries. Why is that? The researchers themselves hypothesized on that very point. They assumed three things.

First, if you’re eating fries a lot, then you’re probably also noshing on other salty and fatty meals or snacks. Besides that, your diet may include a lot of red meat and sweetened drinks like soda. Those can all hurt your health.

Eating a lot of fries could also boost your chances of developing obesity, diabetes, and high blood pressure. This could then open the door for you to get cardiovascular disease. Speaking of cardiovascular disease, all the salt and fat in fries makes you more susceptible to ending up with this disease.

In another interesting study, this time from 2014, the American Journal of Ophthalmology noted that there may exist a correlation between age-related macular degeneration and the foods we eat as part of a Western diet. Who knew?

We also have to talk about acrylamides. This chemical activates in some foods when you bake, roast, or fry them at certain temperatures. Besides the high temps, acrylamides develop in foods with asparagine, which is a type of amino acid, as well as sugars. Fries check off all the boxes then.

Acrylamide may be a carcinogen, but more research will have to confirm that. For now, scientists and researchers at such organizations at the Joint Food and Agriculture Organization/World Health Organization Committee on Food Additives and the European Food Safety Authority do believe in the emerging link between acrylamides and cancer risk.

In fact, Oman’s Sultan Qaboos University professor Allal Ouhtit noted the following about acrylamides: “At very low concentrations, it will accumulate during the years of childhood and adolescence and will contribute to serious disease, including cancer.”

Does all this mean you have to give up French fries forever? Not necessarily. If you have them maybe weekly or even more seldom, you should be in the clear. Most people probably know it’s not a good idea to eat fries every day of the week anyway. Now the research is out there to prove as much.

How to Make Fries Healthier

You also have another option if you’re a tried and true French fry lover. You can make your own healthy fries at home. This benefits vegans because you can ensure all the ingredients you use adhere to your diet. Even non-vegans will enjoy having control over their fry-cooking method so they can make the best choices for their health.

How do you make healthy French fries? Try the following methods, tips, and tricks:

French fries, unless you’re getting them from McDonald’s, are vegan. They’re just potatoes, salt, and oil, after all. However, a lot of data has surfaced in the past couple of years denouncing fries. There was one captivating, eight-year study that found that those people who ate fries twice or more a week were more likely to die. That was regardless of if they also smoked, drank, or were obese.

Other data says fries can cause vision issues and could even contain a carcinogen known as acrylamide. The research all concludes that occasionally eating fries is okay, but don’t do it often. Well, unless you make healthy versions. Swap out potatoes with other vegetables, bake instead of fry, and skip the salt and you will have some tasty fries that won’t put your health at risk. Talk about yum!