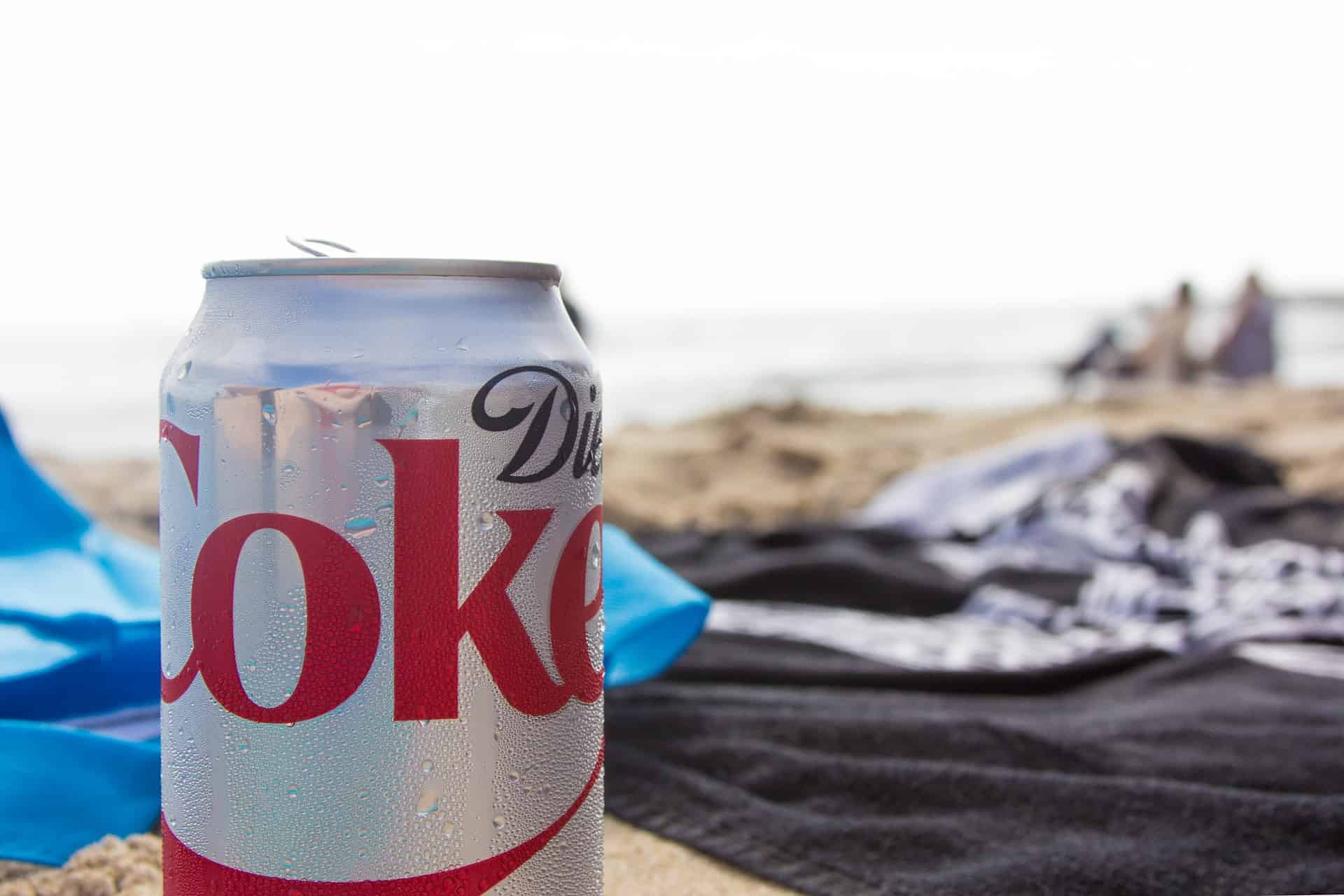 Most people are aware of the health risks of soda, as it may contribute to type 2 diabetes, heart disease, and tooth decay. Thus, although you can drink most soda as a vegan, you tend to avoid it and stick to diet drinks instead. Is this the best idea? Does diet soda have non-vegan ingredients?

Diet soda is generally vegan-friendly, unless it’s Diet Pepsi. This contains traces of fish gelatine, one source of animal byproducts vegans have to avoid.

In today’s post, we’ll discuss more about why vegans should skip Diet Pepsi. We’ll also talk about what other diet drinks do contain animal products that you might want to think twice about drinking.

What Is Diet Soda?

First, what exactly is diet soda, and what makes it different from regular soda?

A diet beverage includes carbonated water and artificial sweeteners, but no sugar. That could make the drink less of a diabetes and heart disease sugar bomb compared to regular soft drinks. The other benefit of Diet Coke and related drinks is that they’re very low in calories. Some are altogether calorie-free while some have paltry few calories.

The flavor of diet beverages is not all that different than full-sugar soda, at least not once you get used to it. That’s why Diet Coke and similar drinks sell so well.

What’s in that can of Diet Coke or other diet drink? Well, from brand to brand, the ingredients do vary. Here’s what you can generally expect to find in your sugar-free soda:

Some of the ingredients on the above list may give vegans pause. Are all those products really vegan-friendly? Let’s go over them one by one and address them.

Caffeine is safe for vegans to drink, so you’re fine there. Minerals and vitamins are also a-okay. E202, also known as potassium benzoate, is a preservative that is vegan-friendly, although a lot of preservatives are not.

Since diet drinks use natural flavorings, that shouldn’t be a source of concern. Caramel flavoring comes from corn and anthocyanins are naturally-occurring as well. For instance, as we just wrote about, black rice has that trademark hue because it contains more anthocyanins than other types of rice. As for carotenoids or carotene, this is another natural plant pigment that makes foods orange or red.

The acids in your low-fat soda shouldn’t raise any red flags as a vegan. Sucralose, while not very healthy, is technically vegan. The same is true of Stevia, saccharin, and aspartame. Carbonated water is also perfectly safe for you to drink as a vegan.

For the most part then, a vegan can drink diet soda. One notable exception is Diet Pepsi.

What Makes Diet Pepsi Not Vegan?

What is it about Diet Pepsi that makes it a poor drink choice if you’re a vegan? According to a 2017 report on UK news site Metro, PepsiCo confessed that some of their drinks “do contain small traces of fish gelatine.” The statement also mentions that the “small traces of fish gelatine” are included in the ingredients to stabilize the beta-carotene.

Fish-sourced gelatine, as we’re sure we don’t have to tell you, is not an ingredient a vegan wants to see on their drink label, especially not Diet Pepsi.

What Other Soft Drinks Are Not Vegan?

Many popular PepsiCo drinks, among them Diet Coke, do not need the same beta carotene stabilization. However, that doesn’t mean you’re safe to drink every other PepsiCo beverage as a vegan. Far from it. Schweppes Orange Squash, Kia-Ora Orange Squash with no added sugar, Lilt Zero, and regular Lilt all have the gelatine on their respective lists of ingredients.

While PepsiCo produces a lot of beloved soft drinks, they’re not the only soda manufacturer out there. Other big names in drink production are just as liable. If you’re a fan of orange soda, most brands have ester gum, a food additive that relies on glycerol for stabilization and can thus be labeled as an animal byproduct.

Some might say that Mountain Dew isn’t vegan because it has yellow 5, a food coloring that may be tested on animals before it’s added to your soda. Ingredients like these don’t necessarily bother everyone on a vegan diet, so it’s up to you if you find yellow 5 troublesome.

Essentially, if you’re worried that your soda could disrupt your veganism, then make sure you steer clear of the following ingredients.

It all depends on the source of the natural flavors, but some may come from animal products or byproducts and thus are to be avoided.

As a vegan, you shouldn’t eat foods that come from bees, with honey at the top of that list. You won’t come across soda that uses honey as a sweetener instead of sugar all too often, but it does exist. In this case, you’re better off with the sugar, as most sucrose sources are indeed vegan.

Although many vitamins are healthy for you, vitamin D3 is one you shouldn’t consume as a vegan. It comes from sheep’s wool oil. Said oil appears more often in sports drinks than sodas, but it never hurts to check the ingredients list just to be on the safe side.

The food coloring known as cochineal is produced from insects. You may take issue with ingredients like these or you may not, as that opinion differs from vegan to vegan.

Which Sodas Can Vegans Drink?

It may seem like so many sodas are off-limits as a vegan, but that couldn’t be further from the truth. Here are some sodas that vegans can safely enjoy.

We mentioned before how the inclusion of yellow 5 as a food coloring agent might be a problem for you. However, yellow 5 in itself is a vegan-safe ingredient, it just may be tested on animals. The other ingredients in Mountain Dew are brominated vegetable oil, calcium disodium, gum arabic, erythorbic acid, sodium citrate, caffeine, sodium benzoate, natural flavors, citric acid, concentrated orange juice, and sugar from high-fructose corn syrup.

You now know better than to drink Diet Pepsi, but Diet Coke has no fish-based gelatine to worry about. You can still enjoy less sugar and fewer calories with a can of Diet Coke and stick to your vegan eating habits too.

Like Diet Coke, you can also enjoy a can of full-sugar Coke every now and again. It shares a lot of the same ingredients, with the addition of sugar, caramel color, and high-fructose corn syrup.

The lemon-lime flavor of 7Up is sourced from ingredients like calcium disodium, natural flavors, potassium citrate, citric acid, and high-fructose corn syrup. It too is safe for vegans.

If you prefer your cola with a cherry flavor, you can drink Dr. Pepper as a vegan. The beverage contains caffeine, sodium benzoate, natural artificial flavors, phosphoric acid, caramel color, and high-fructose corn syrup.

Maybe you prefer Sprite over 7Up. If so, you’re in luck, as you can drink Sprite too if you’re adhering to a vegan diet. This sweet drink has the following ingredients: sodium benzoate, sodium citrate, natural flavors, citric acid, and high-fructose corn syrup.

If you’re a Diet Pepsi drinker, that’s one soda you’ll want to quit as a vegan. PepsiCo themselves said that some of their “drinks do contain small traces” of gelatine sourced from fish, including Diet Pepsi. Schweppes Orange is another no-no, as it also has the gelatine. Plus, like most orange drinks, it probably contains ester gum, another non-vegan ingredient.

Most diet soda includes carbonated water, sugar, and natural flavorings. Those are all okay for vegans to drink. Do make sure that you avoid cochineal, vitamin D3, honey, ester gum, and some natural flavorings in your soda, which may not be vegan. That still gives you plenty of great beverage options, including Diet Coke.