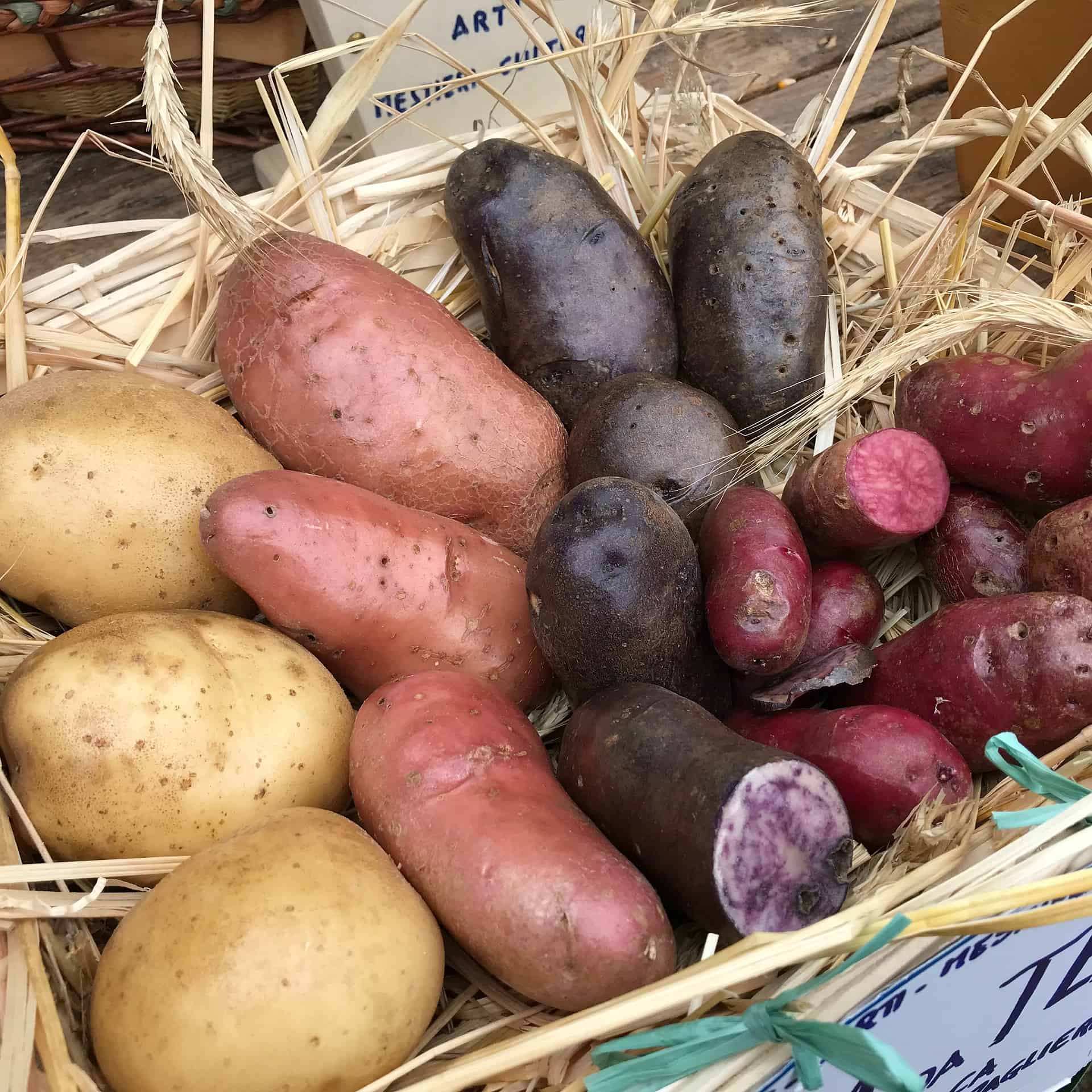 If you want a vegetable that fills you up, the starchiness of a potato can’t be beaten. From russet to red potatoes, fingerlings, white, yellow, and even sweet potatoes, you have plenty of potato varieties to sink your teeth into. As a vegan, can you eat those and other types of potatoes or must you refrain as part of your diet?

Vegans can eat potatoes, especially when consumed plain. Cheesy potatoes or any potato dishes that use milk are off-limits unless you add vegan dairy substitutes.

Keep reading to learn more about the different types of potatoes, how nutritious they are, and which potato dishes vegans can and can’t eat. If you’re new to veganism, you’re not going to want to miss this!

The Types of Potatoes

Potatoes come in all shapes, sizes, and colors. Here’s an overview of the types of potatoes you might find in the produce section at your local grocery store.

The Nutrition of Potatoes

Are potatoes a nutritional part of your diet whether you’re a vegan or not? According to the USDA, here are the nutrition facts for one medium-sized plain potato or 213 grams:

Although potatoes are more carb-heavy than your average vegetable, one medium potato contains only 12 percent of your daily recommended value of carbohydrates. That’s not bad. Plus, you’re getting lots of vitamins and minerals for a healthy, stronger you.

On their own, potatoes are perfectly fine for vegans to eat considering the spud is indeed a plant-based vegetable. Not everyone likes the taste of plain potatoes though. That’s why, in these next two sections, we’ll cover which potato dishes are safe for vegans to have versus those that are not.

Let’s start with the vegan-friendly potato sides and meals.

Although air-frying isn’t the healthiest way to eat food, it doesn’t change the vegan properties of the potato. Try topping your air-fried potatoes with chives or garlic seasoning.

You don’t always have to eat your potatoes mashed, steamed, or boiled. By making chips at home, you can cut down on some of the unhealthy preservatives found in the store-bought varieties.

If you omit the clarified butter and use something else to grease your pan, then hash browns are not off the table as a vegan. You can’t eat them with a side of eggs though!

You can’t go wrong with a baked potato, but do be sure you skip the butter or sour cream. Top with chives and salt instead.

Don’t forget the sweet potatoes when making spud-based dishes as a vegan. Plain or with some cinnamon, these potatoes are very much something you’ll want to eat.

The following potato dishes all contain ingredients that are not allowable on the vegan diet. Steer clear of these potato recipes or replace questionable ingredients with vegan substitutes.

Mashed potatoes are much adored, but the original recipes call for milk. You can make your mashed potatoes vegan by subbing out regular milk for soymilk or even using water.

Almost every ingredient in German potato salad is vegan-safe except for bacon. By stripping away the bacon, this dish loses some of its charm, but is now okay for you to eat.

This cheese-based dish is one of the more obvious ones to skip as a vegan. You can recreate a potatoes au gratin recipe with vegan cheese if you must have it.

Loaded potatoes normally mean they’re topped with bacon, cheese, butter, and probably sour cream as well. In other words, you’re better off not eating these spuds at all.

Potatoes are a nutritious, filling root vegetable that is okay for vegans to eat when plain. When going out to eat or having a meal at a family member’s house, make sure you ask how they prepare their potatoes, as these spuds can become un-vegan in a hurry depending on the recipe!