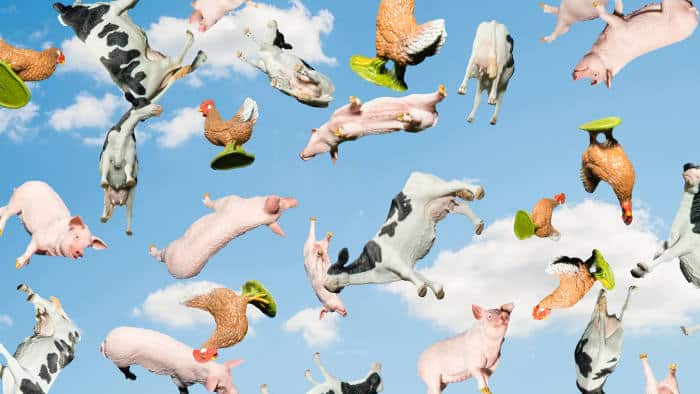 More people believe in climate change than those who don’t, at least in the United States, says 2018 data from Yale Environment 360 . That’s promising, because it’s happening now and will impact future lifetimes if nothing changes. You may do what you can to help, but have you ever thought about going vegan? Can that really work to combat climate change?

Veganism can play a major role in climate change, says 2019 data from the Intergovernmental Panel on Climate Change or IPCC. By eating less meat or none at all, we need resources from less land to nourish our bodies. Then, through rethinking land use, we can maintain higher carbon stores.

In this article, we will elaborate more on the above as well as share some other ways how becoming a vegan could help our planet. We’ll also touch on what else you can do besides veganism to get the earth on the right track. You won’t want to miss it!

That’s why switching to a plant-based diet is recommended. You don’t need as much land to eat healthily then. The IPCC says this gives farmers the room to use the land in better ways, such as for carbon stores. Carbon, on its own, is beneficial to our planet while carbon dioxide is not.

Considering the idea of carbon taxes have been thrown around as a means of fighting climate change, this is sort of in the same vein, but there’s no money required from you. You’ll contribute to fewer fossil fuels as a vegan.

Everyone talks about greenhouse gas emissions, as they’re what’s driving climate change. There are three big ones, one of which we already talked about (carbon dioxide). The other two are nitrous oxide and methane.

Nitrous oxide is a danger because it has a 300x potency rate over carbon dioxide. Most emissions of nitrous oxide come from the production of food, mostly dairy, eggs, and meat. More than half of emissions, 65 percent in all, are from the above foods alone.

While you can do very little to stop this production at current, by refusing to buy dairy products, eggs, and meat, at least you’re not increasing the need for these foods to be continually made. That could, in turn, lessen nitrous oxide emissions.

We also have to discuss methane emissions. These primarily come from animals like goats, sheep, and cows. Yes, the very same animals that then get made into food, which produces more greenhouse gases.

You see, these animals live on farms, get fed, and then release methane as part of their digestion. Besides that source, which is admittedly a natural one, methane gases can also come from the cesspool that hold the feces of these animals.

According to WhatsYourImpact.org, livestock farming is one of the biggest producers of methane that we humans make. It comprises up to 27 percent of methane production. Only fossil fuel production and usage makes more methane at 33 percent.

A 2019 article on BBC has similarly sad news to share. They mention that food production contributes to 26 percent of the greenhouse gases on the planet. Most of these food-based emissions, 58 percent, are sourced from animal products. The other 42 percent include any other type of food. The worst animal product offenders are lamb and beef, which are half the emissions from farmed animals.

You might think you’re making a smart choice by switching to pasture-raised, free-range, or other organic meats, right? PETA states there’s even more methane used in raising these animals and then making them into food. It’s much better to skip the animal products and byproducts altogether.

What Else Can You Do to Combat Climate Change?

You’ve been inspired by reading the information above and you’ve decided to try a vegan diet as a result. You’re already lessening greenhouse gasses through your dietary choices, but you want to do more. What are your options?

Here are some things you can do today to possibly turn the world around not just for ourselves, but for future generations as well.

Your voice matters, and voting is a chance to let it be heard. Use your voice at the polls. Canada will have a federal election in November 2019 while the United States’ presidential election is in November 2020. Smaller elections for mayors and other city staff take place between now and then as well.

Follow the politicians who care about climate change and try to vote to get them into office. They can drive bills and legislation that could make a real difference against climate change.

Today, as climate change becomes more and more of a pressing issue, a wealth of movements have cropped up in countries around the world. Some of these are led by teens and others adults, so it shouldn’t be too difficult to find a movement you fit into. If you by chance cannot, then start your own! You could even have it revolve around veganism if you so choose.

Even if you can’t join a movement for any reason, you can always donate or volunteer for causes you deem worthwhile.

Become a Part of a Renewable Energy Co-Op

If we all do our part for the environment, we can make a big impact. One way you can contribute to that impact is by joining a renewable energy co-op in your city or town. This lets you get a stake in local projects centered around renewable energy. It’s best that you speak with your investment advisor before doing this, though.

Another major source of greenhouse gases? The very cars we use to get to and from work each and every day. If you can, why not walk to work? Not only does this give you a chance to enjoy nature, but it’s good exercise, too. If that’s not fast enough for you, you can always try biking there.

Some people have longer commutes, so biking and walking are out of the question. You still have some earth-friendly options. For instance, you can carpool so there’s only emissions from one car instead of yours and a coworker’s. Buying a hybrid or electric vehicle is another solution, as is riding public transit like trains or subways.

Do Small but Important Things Around the Home

When the working day has ended, you can come home and make lots of little adjustments for a home that contributes less to climate change. Here are some ideas to get you started:

A vegan diet is not only great for your health, but it can help the planet as well. When you choose not to eat meat, dairy, and eggs, you’re taking yourself out of the equation of many major sources of greenhouse gases, including carbon dioxide, nitrous oxide, and methane. If that’s not a great reason to consider veganism, then we’re not sure what is!