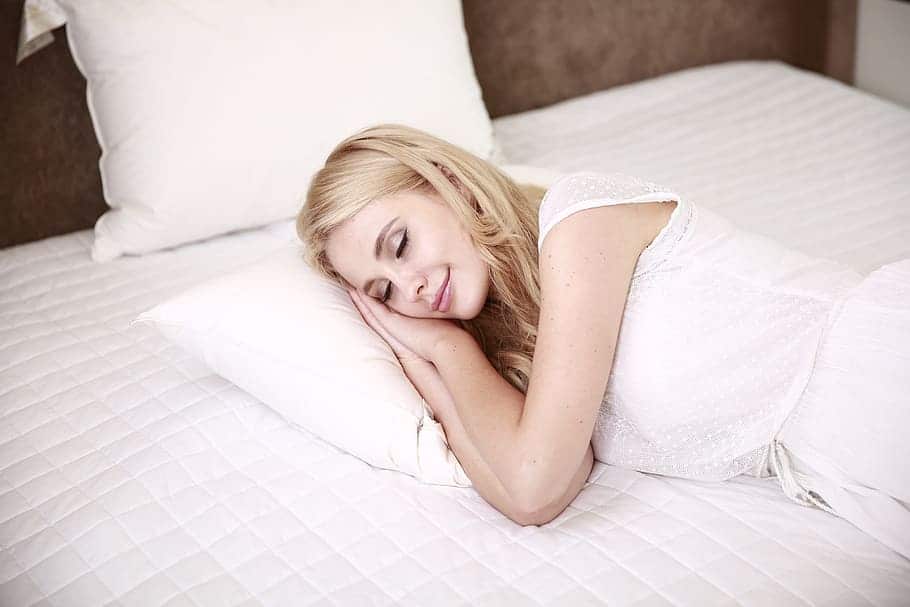 If you make a wish before bed, it may be to lose weight. During your waking hours, you try to eat right and get plenty of exercise. You figure that sleep is a chance to replenish your energy, heal your body, and get you ready for the day ahead. You never imagined you could possibly lose weight while sleeping, but is it possible?

By getting the recommended amount of sleep each night, you can ward off weight gain. While this could possibly lead to weight loss, sleeping is not a substitute for a regular exercise regimen and nutritious diet. It can only supplement a healthy lifestyle.

If you’re curious to learn more about the connection between sleep and weight loss, this is the article for you. In it, we’ll discuss how much sleep you need to get to lose weight as well as how many pounds you may drop from snoozing.

Why Does Sleeping Help Us Lose Weight?

To lose weight, you have to eat fewer calories than your body burns. Typically, this is a dietary achievement, but as we said, it will involve exercise as well. Since you can’t really exercise when you’re asleep, how does catching some Zzzs trigger weight loss?

The first reason is a simple enough one. The fewer hours you’re awake, the less food you’re consuming. Since that means you’re putting fewer calories into your body, losing weight may be possible.

The link between sleep and weight loss goes a lot deeper than that. According to Belle Vie International, a Missouri-based hormone treatment facility, sleep plays a major role on our hormones. When we don’t get enough rest, such as through sleep deprivation or insomnia, we not only have a worse memory and lack of focus, but changes to our hormones as well.

Testosterone and estrogen are two of these affected hormones. Decreases in testosterone levels may lead to sleep apnea and other sleep disorders. Estrogen, if it drops too low, could induce anxiety and thus sleeplessness. When estrogen levels are healthy, we rest easier.

Other hormones, such as those responsible for our appetite, also become disruptive when we get too little sleep. Ghrelin and leptin in particular are produced in the largest quantities while we’re in dreamland. If you fail to get enough sleep, your level of satiety can disappear. You may eat more, even when you’re not necessarily hungry, just because you feel like you have to.

A 2013 report published in the Proceedings of the National Academy of Sciences of the United States of America goes as far as to state that “insufficient sleep is associated with obesity.” To learn more about why this is, PNAS involved 16 participants in a sleep study. The study lasted for upwards of two weeks.

Upon wrapping up the study, the researchers found that those who didn’t get enough sleep gained weight (even with no changes to leptin or ghrelin hormones), had an altered circadian rhythm, and produced a lowered daily energy expenditure by roughly five percent.

Belle Vie International also notes that your metabolism could slow down if you don’t sleep enough. Supporting this is a WebMD article that cites an interesting study. For two weeks, people on a diet slept less. During this time, they continued to consume the same amount of calories. Despite this, their weight loss from fat decreased by an alarming rate of 55 percent.

The reason our metabolism becomes sluggish with enough sleepless nights is because of how sleep impacts insulin sensitivity. Insulin is a hormone that takes the foods we eat, especially starches and sugars, and converts them into something useful, like energy.

If you don’t sleep well enough for even four days, your insulin sensitivity can drop by as much as 30 percent, perhaps even more.

That PNAS study from before is noteworthy as well because it produced another correlation between lack of sleep and gaining weight. If you’re not getting enough sleep, your body lacks natural energy. You may feel hungrier to try to make up for the energy deficit, and as a result, you eat more. This naturally causes your waistline to expand.

If you have more energy because you’re rested, then you don’t need quite so many snacks, sugary coffees, and other calorie-laden foods to get you through the day. Also, without that cloud of exhaustion hanging over your head, you can make smarter eating choices.

How Many Hours of Sleep Do You Need to Enjoy These Benefits?

Throughout this article, we’ve mentioned sufficient and insufficient sleep. What’s the difference? How much sleep must you get every night to potentially cause weight loss?

It’s a little different for everyone, but the recommended amount of sleep to aim for as an adult is no less than seven hours nightly. Some adults need even more sleep, upwards of eight or nine hours, and that’s normal, too.

Anything less than seven hours could begin sending your weight loss aspirations in the other direction. While it’s okay to get something like six and a half hours of sleep a night, you want to be careful that number doesn’t begin dropping further.

Not only do you risk weight gain, but a whole slew of other health maladies as well. For instance, a handful of studies have found that getting less than seven hours of sleep may boost your chances of heart disease or stroke. If you sleep six hours or fewer, your risk of developing diabetes goes up as well.

Also, 2010 data from the journal Sleep states that getting less sleep could be a contributing factor to a premature death.

The information in this article has inspired you to start focusing more on your Zzzs. Not only are they important for weight loss, but for your overall health and longevity as well. If you’re not doing so already, you plan on getting at least seven hours of sleep a night going forward.

When you consider that you should sleep at least seven hours, it’s all simple multiplication from there. If you weigh 200 pounds, then you can burn 420 calories during sleep alone. If you’re only 150 pounds, then it’s 315 calories.

Is between 300 and 400 calories really enough to lose weight? Remember, weight loss occurs when you eat fewer calories than your body burns. Sticking with the example of someone who weighs 150 pounds, if you very much limit what you eat, then every week, you might lose half a pound by sleeping alone.

Conclusions about sleep and weightloss

By getting at least seven hours of sleep a night as an adult, it’s possible to lose weight. If you weighed 150 pounds, you’d burn about 315 calories each evening. When following a tight diet, you may lose a half pound a week, which isn’t much.

This still doesn’t mean it’s a good idea to toss aside your sleep schedule. Getting too little sleep can cause you to gain weight from hormone imbalances and lack of energy. You can also shorten your life, so make sure you keep up on those Zzzs!