When going out to eat as a vegan, there are some restaurants you avoid by default. You know they won’t serve anything you can enjoy, so why go? These establishments probably include fast food joints, right? Well, it turns out that Taco Bell, Burger King, etc. may be worth a second look, as they have more vegan offerings than ever. Which fast foods are vegan?

The following fast food items from your favorite chains are all safe for vegans:

If you’re curious how the above entrees, side dishes, and desserts are all considered vegan, we encourage you to keep reading. In this article, we’ll discuss more about each menu item, including nutritional facts.

Del Taco­ – The Beyond Avocado Taco

Beyond meat, a plant-based alternative to real beef, is all the rage lately. You’ll see it a lot on this list, which is a good thing, since it now opens up your eating options at your favorite fast food establishments.

Take, for instance, the Beyond Avocado Taco at Del Taco. It features tomatoes, lettuce, and Beyond Meat with seasoning all nestled into a hard taco shell and finished with avocado. 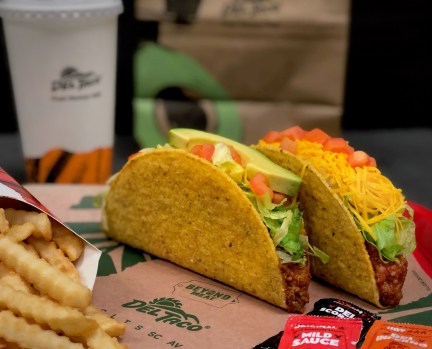 This is one of the more common-sense entries on this list for sure, but hey, no one wants to be deprived of ice cream. Now you won’t have to be when you stop into Baskin Robbins. Just ask for the dairy-free stuff. You get plenty of flavor options, such as Coffee Caramel Chunk, Chocolate Chip Cookie Dough, and Chocolate Extreme.

If you’re feeling hungry and need something substantial during your next Starbucks run, their sprouted grain bagel is vegan-friendly. It contains ingredients like sunflower seeds, oats, flaxseeds, and rye. 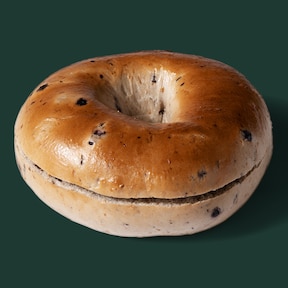 When you need to refuel in the middle of your mall trip, there’s no need to keep walking past Auntie Anne’s. Their sweet almond pretzels combine saltiness with sweetness in one delectable snack that vegans can eat.

Here are the nutrition facts for a single pretzel:

You deserve to not have to cook for yourself every night, too. When the cravings for pizza are strong, call up Domino’s (or order online) and request their thin crust Pacific veggie pizza. Tell them to hold the cheese.

Here’s what you do get for 1/8th of a medium-sized pizza:

Beyond meat once again makes an appearance in the Beyond Breakfast Sausage Biscuit from Hardee’s. It tastes just like meat but isn’t!

Per sandwich, this is the nutritional information:

If you thought your days of eating burgers at Carl’s Jr. were done since you went vegan, think again! Their Beyond Famous Star, which is charbroiled to perfection, also features the brand’s special sauce, onions, tomato, lettuce, and pickles.

The burger’s nutrition facts are as follows:

Admittedly, your menu items are rather limited at Papa John’s since most dishes are slathered in cheese, but the breadsticks are safe for vegans. So are most of the doughs the chain uses for its famous pies, by the way. Maybe see if you can tweak a pizza the next time you go in.

Those addictive little sliders White Castle serves are not outside of your reach. Set your sights on the veggie sliders with Sweet Thai Sauce, as it really livens up the tiny burgers. There are also Impossible sliders on the menu, so come back to White Castle whenever you want!

Here’s a newer offering that’s been making a big splash, Burger King’s move into Impossible meat territory. They beat out their long-time rival McDonald’s in doing so, as Mickey D’s has yet to roll out any Impossible offerings.

This version of the Whopper tastes just like one made with meat, except it’s all plant-based. Per sandwich, you’re consuming:

Should your friends or family want to stop at a Denny’s, there’s no need to refrain on your part. You can always enjoy their Build-Your-Own burger option, swapping out the meat patty for an Amy’s Kitchen veggie patty. Ask for a wheat bun as well and no cheese and you’re in the clear.

Here are the nutritional facts for this customized Build-Your-Own burger:

Even Subway serves meat-free options, such as their Beyond Meatball Marinara sandwich. Each meatball is made of plant materials instead of beef, so feel free to sink your teeth in. Just order your sandwich with no parmesan and provolone cheeses.

The sandwich without any toppings has:

A sofrito, pluralized sofritas, consists of organic tofu with spices and roasted peppers when you order it at Chipotle. You can get sofritas as part of a burrito bowl with romaine lettuce, tomato salsa, black beans, and brown rice for a vegan meal that’s very tasty.

The Impossible Whopper isn’t the only offering from this fast food chain you can eat as a vegan. Whether you prefer them for breakfast or dessert, the delectable French toast sticks at Burger King are also safely vegan.

For a three-piece pack, here are the nutrition facts: 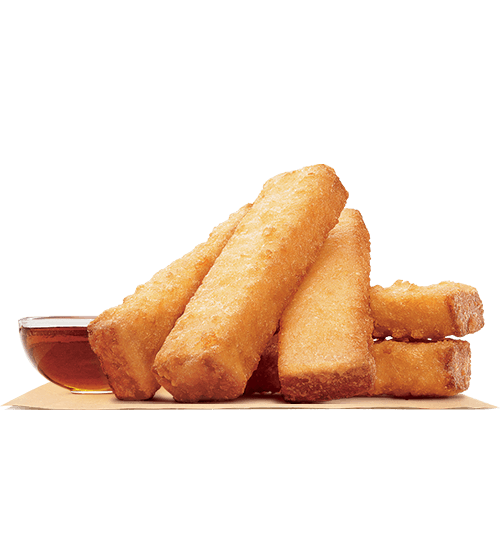 Most of the above meals aren’t complete without French fries, but don’t worry. We’re not asking you to go without. At Carl’s Jr., there are no animal additives used in the deep-frying process, so you can eat their fries as a side or even as a snack.

A medium-sized serving of fries contains:

The fast food joints you gave up when you became a vegan are not totally off-limits. From Burger King to Starbucks, Auntie Anne’s, Carl’s Jr., White Castle, Taco Bell, and many more, these establishments have begun offering meat-free, plant-based options as well as cutting other ingredients to make more menu items vegan. The next time hunger strikes, you know where to go!