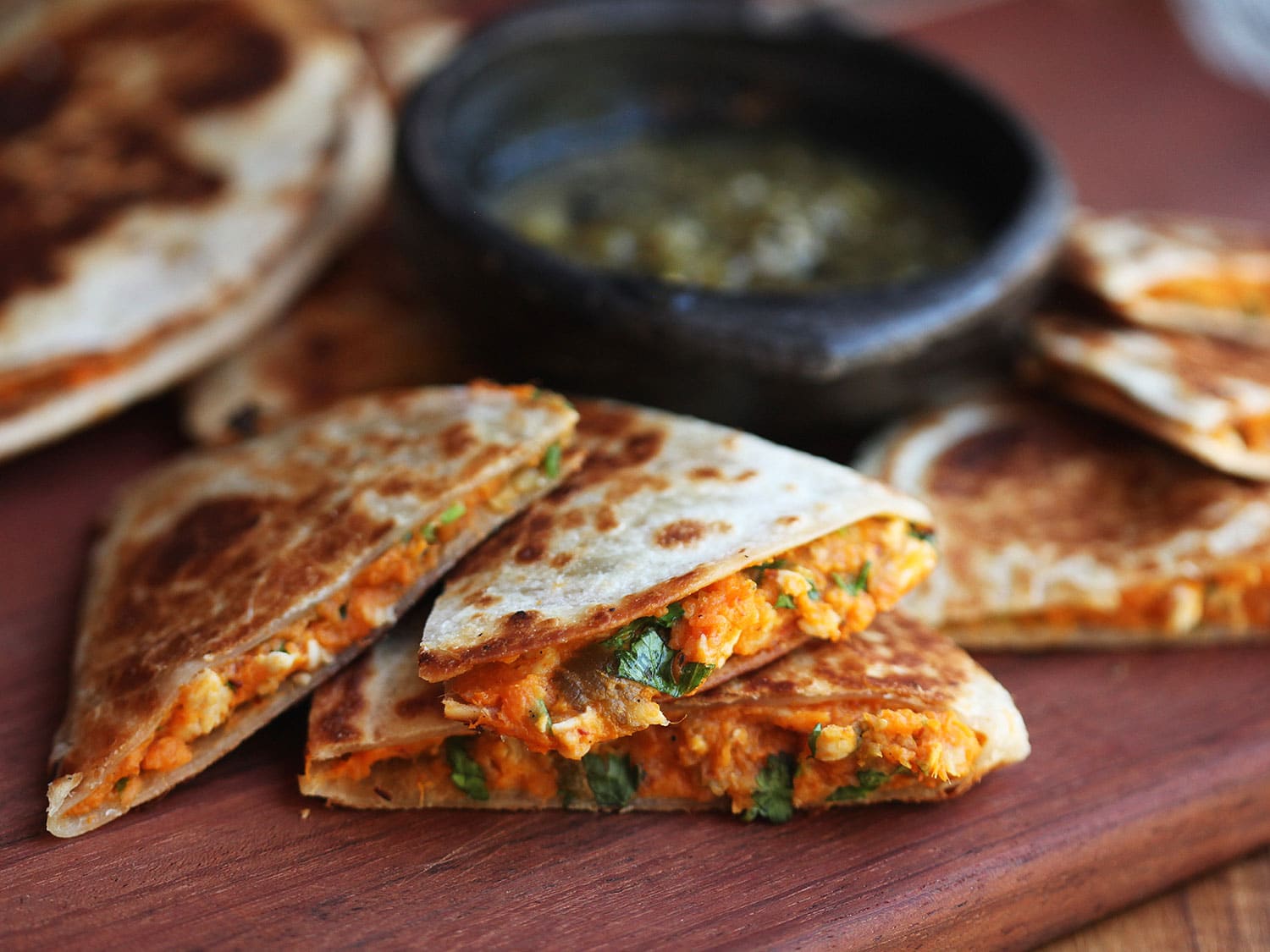 In our last post, we introduced you to some yummy treats and ingredients used for cooking your own SOS-free vegan meals. We also provided plenty of great juicers, spiralizers, blenders, and other cooking tools for less time in the kitchen.

Now that you have the supplies to make amazing meals, what can you cook? There are countless recipes on the Internet, but just because they’re vegan doesn’t mean they’re all SOS-free. We took all the guesswork out of prepping breakfast, lunch, and dinner with five recipes for each meal.

These are some of our favorite dishes. Even though a few of them look indulgent, all the recipes are healthy, vegan, and of course, SOS-free. With pancakes, pasta, Buddha Bowls, and more, you’ll feel like a pro chef in no time!

This yummy recipe comes courtesy of Wholesomely Elle. It’s an Instagram-worthy breakfast that’s so simple to prepare you’ll hardly believe it. Even better is that it’s a versatile dish, as you can make it in the toaster oven, air-fryer, or your standard oven.

Since a sweet potato is used in lieu of toast, the other ingredients are completely customizable. Here’s what you might try as toppings:

These Triple Almond Energy Balls from Oh She Glows would also make for a great snack or dessert. They don’t bake, but freeze, so you can make these at the beginning of the week and reach for them when that midweek slump hits.

Feel free to change up the ingredients so they’re more to your liking. The original recipe calls for:

Not all breakfasts have to be sweet, as Healthy Happy Life proves. Their Shamrock Breakfast Sandwich includes such staples as jalapeno sauce, petitas, and kale. Yes, it’s going to have a kick to it, so get your taste buds ready! This is definitely a good way to wake up your brain on a Monday morning.

There are three components to this dish: jalapeno mayo, kale sauté, and the patty. All are vegan, so you’ll be whipping them up from scratch with the exception of the store-bought patties. Here’s what you’ll need.

For the jalapeno mayo:

For the kale sauté:

Vegan, SOS-free pancakes are rich in texture and flavor, especially when you follow this recipe from Feasting on Fruit. You’ll never want to go back to eating oil or sugar again after you taste these! They’re the perfect weekend treat.

The most interesting part of this recipe is how it omits rice, cashews, almonds, eggs, gluten, oil, and bananas. How do the pancakes stay together? With these ingredients:

Why stop at pancakes when there’s French toast to make on a lazy weekend morning as well? This is another delicious breakfast treat, this time from Love and Lemons, that could just as easily double as a dessert. The vegan version is all about substituting out traditional Brioche bread for that which is vegan, sugar-free, and salt-free. There’s also no eggs to be found in this recipe, not even egg substitute.

Whether you eat these mashed potatoes from Hello Nutritarian as a side dish or as a meal themselves, you’ll never crave the calorie-heavy version again. You still get all the dreamy, soft, fluffy goodness of traditional mashed potatoes thanks to a secret ingredient. Want to know what it is? Okay, we’ll tell you. It’s cauliflower sauce!

Besides that amazing cauliflower sauce, here’s what else you’ll need to make this simple yet satisfying dish:

The exotic, delicious spread from the Middle East known as Baba Ghanoush stars a vegetable familiar to all SOS-free vegans: the eggplant. Keep things salt-free and oil-free with this recipe from Straight Up Food.

Here’s another exotic lunch that will take your taste buds on a vacation. This vegan Thai Lemongrass Coconut Curry Soup comes straight from Salt & Lavender, and it sure is a winner. Don’t be too surprised if everyone else at the office is jealous of your awesome lunch, let alone that you made it yourself!

You can put a lot between two slices of vegan bread, as you’ll quickly find with this Smashed Chickpea and Avocado Salad Sandwich recipe from PETA. It’s got creamy avocado, satisfying chickpeas, and plenty of other zesty flavors that make this easy weekday lunch such a favorite.

Our last pick for great SOS-free vegan lunches is from Eating Well. Their vegan Buddha Bowl is rated nearly five stars. It has grains, so it’s high in fiber, yet is soy-free, nut-free, egg-free, dairy-free, and SOS-free. It calls on ingredients you have around the house and could even be consumed as a light dinner.

Major SOS-free veganism resource Raw Till Whenever will guide you in making your first vegan burgers. These taste like your favorite patties but without any animal byproducts, and that’s all thanks to hearty garbanzo and black beans. Since the ingredients go into a blender and prep fast and quick, these burgers are ideal in a pinch. You can still be the hit of any cookout or barbeque with this five-star dish.

It can be hard to stick to a SOS-free vegan diet in the winter when you want to reach for comfort foods, but hold tight. Forks Over Knives has an incredible recipe for Red Lentil Chili. This dish translates well to the warmer months, too, when you can serve it at cookouts.

Whole foods blog Cookie and Kate provides us with this rich, fulfilling meal full of various flavors. This is more than just a salad. The quinoa is nutritious and filling, enough so that you might be able to go the rest of the night with the energy you get from this amazing dinner.

There are two parts to this dish, the curried coconut quinoa and the roasted cauliflower. Preparing the cauliflower just so is the key to this dish’s success, so we’ll break the ingredients into two parts.

For the curried coconut quinoa and greens:

For the roasted cauliflower:

Does it get any more classic than this? If you’re trying to introduce kids with picky appetites to a vegan diet, spaghetti and meatballs is a perfect dish to make. It’s full of all the flavors everyone recognizes without all the heavy calories, carbs, and guilt that generally comes after consuming a big pasta dish. It’s easier to make than you think, too, when you follow this recipe from Whole Foods Market.

This is definitely a full meal, so don’t make it unless you have several hours to devote to cooking. You’ll need to prep faux Parmesan, marinara sauce, and vegan meatballs from scratch. The good news is you can use whole wheat spaghetti from a box. Here are the ingredients you’ll need for the other parts of this recipe.

For the cashew Parmesan:

For the marinara sauce:

You don’t have to give up Taco Tuesday entirely now that you’re an SOS-free vegan. With this grilled burritos recipe courtesy of Veggies Don’t Bite, you can still enjoy rich, zesty Mexican flavors that make everyone gather around the table.

The salsa crema in this recipe is rich and requires its own separate batch of ingredients from the burritos. Let’s go over both separately.

For the salsa crema:

If you weren’t convinced before, these recipes prove that SOS-free vegan cooking has all the flavor and taste of traditional non-vegan meals. You won’t even notice what you’re missing, which is sugar, salt, oil, calories, carbs, and other not-so-good-for-you stuff. You could even convince friends or family to get on board, too!