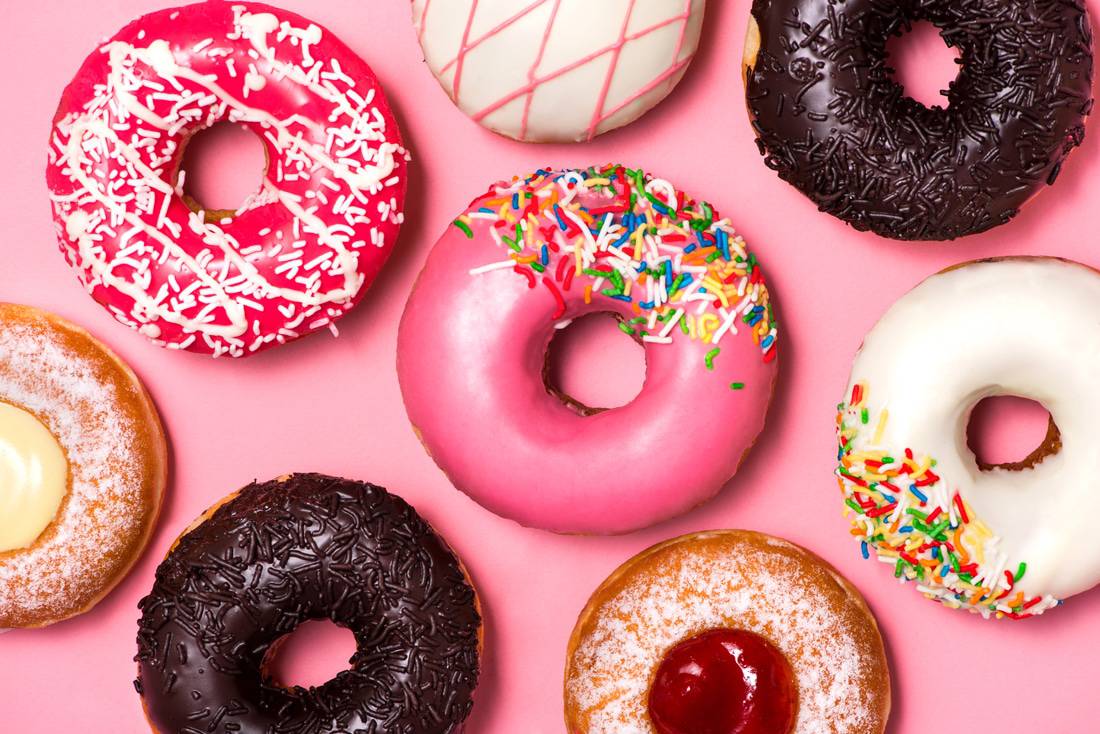 There’s a misconception that if you take a food and make it vegan that the food in turn becomes healthier. While it’s true vegan food omits all dairy, meat, poultry, fish, and eggs, does that necessarily mean it’s good for you? What about those sinful foods like donuts, especially vegan donuts?

In this article, we talk more about the tasty treat that is a vegan donut, including what goes into these donuts on average and whether they or non-vegan donuts are the healthier options. Let’s get started!

What Ingredients Are in Vegan Donuts?

The egg used to make donuts is a big-no-no for vegans, and there’s no one particular ingredient you’re limited to when swapping the egg out. Some vegans favor canned bean liquid or aquafaba, although admittedly that doesn’t get used super often. Instead, more commonly, vegan donuts include:

As for the type of donut you want, anything that you’d find at a Krispy Kreme or a Dunkin’ Donuts is fair game. You can recreate drool-worthy glazed donuts, chewy chocolate donuts, seasonal pumpkin donuts, and even Instagram-worthy filled donuts. As for the toppings or glazes, you just need some vegan ingredients and you’re all set.

What Makes a Food Healthy?

Now that we’ve discussed the ingredients that go into a vegan donut, it’s time to get to the bottom of whether these bad boys are healthy. To do that, we have to understand what makes a food itself healthy.

Foods can be healthy both for what they have versus what they have not. For example, if a food has a lot of vitamins and nutrients in it, then we perceive it as healthy. If it lacks a lot of processed fats or carbohydrates, then that also makes a food healthy, correct?

The American Heart Association says the most unhealthy foods are those that go through extensive processing. These foods almost always have excess sugar and sodium due to refined ingredients. They’re also calorically high yet low in nutrients like antioxidants, minerals, and vitamins. While the American Heart Association mentions foods like cereal, cakes, cookies, and chips as the main culprits for unhealthiness, there are countless other unhealthy eats out there. Plus, you can make foods like cookies or cereal healthy.

That’s why we want to set up some ground rules of what would constitute unhealthy food. Let’s do that now.

Not like it’s a problem for vegans, but anyone who wants to be healthier should stick to lean meats. These should have a fat content of 10 percent or under. This doesn’t apply to donuts, but it’s good to know anyway.

Added sugar tastes delicious, which keeps us coming back over and over again. In fact, there are even studies that support that sugar can become addictive, making us hooked. According to the American Heart Association, it’s important to limit sugar to only 100 calories a day of what a woman eats. That’s six teaspoons. No, not tablespoons, but teaspoons.

All that food processing means what you eat can get bogged down with more sodium than you realize. To maintain one’s heart health, the American Heart Association says you should limit salt consumption to 1,500 milligrams each day. Now, that may sound like a lot, but it’s 0.3 teaspoons, so it’s really not.

We have both good and bad cholesterol, and saturated fat is responsible for raising the bad kind. As your cholesterol increases, often so too do your weight. You’re also more likely to have a stroke and develop heart disease.

To stick within the recommended range of saturated fat, the American Heart Association’s guidelines say to eat seven percent or under per day.

Speaking of bad fats, we also have to discuss trans fats. These too affect your cholesterol, increasing LDL cholesterol. Besides that, you’re at a higher likelihood of getting type 2 diabetes, having a stroke, and developing heart disease. It’s no wonder you should eat under one percent of this fat daily.

Keeping all the above information in mind, we can now explore the healthiness of vegan donuts. Let’s go back to that list of nutrition facts and outline what you’d find in a vegan donut from Whole Foods:

Okay, so there’s no trans fat in these donuts, and that’s a plus. However, you’re getting 13 percent of saturated fat when you should stick within the range of seven percent. The vegan donuts also have 210 milligrams of sodium. That’s still under what the American Heart Association calls for. There’s also six grams or about 1.2 teaspoons of sugar, so you’re good there as well.

Overall, that vegan donut isn’t terribly unhealthy, but it’s not super healthy, either.

Let’s compare the Whole Foods vegan donut to the Krispy Kreme glazed donut. To recap, here’s the nutritional information from the intro:

The surprising thing here is a Krispy Kreme donut has more nutrients and vitamins in it than the vegan Whole Foods donut. That had no vitamins A or C as well as no calcium. While it’s also good the Krispy Kreme has no trans fat, it does contain five grams of saturated fat. At 25 percent of your daily intake, that’s way more than what the American Heart Association says you should eat.

You’re okay on sodium intake, and this donut even has less salt than the vegan donut. It boasts more sugar, though, 10 grams versus six. By doing the math, 10 grams is two teaspoons exactly, so you’re still alright in the sugar department. You’d just have to limit sugar for the rest of the day.

Vegan donuts are generally healthier than non-vegan ones, but it absolutely depends on the type of donut and where you get it from. What matters when making healthy eating decisions is cutting down on trans fats, saturated fats, added sugars, and sodium. Vegan or not, eating a donut isn’t the healthiest thing in the world, and that’s okay. You can have one as a nice treat from time to time.

If you’re concerned about nutrition as a vegan, then carefully read the labels of a vegan donut or any food before you eat it. Good luck!