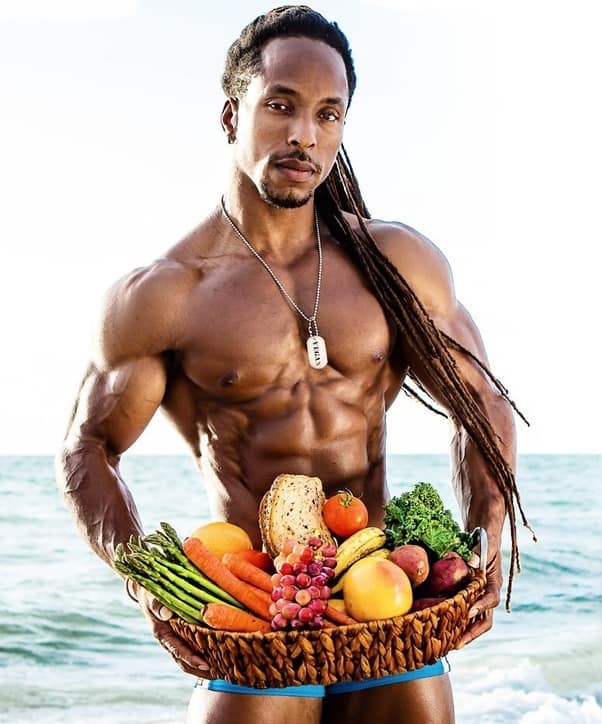 You’re a health-conscious vegan, so you eat a good diet and make sure you exercise. You’ve never stopped to think about whether you might be stronger than a non-vegan, but now you’re curious. Who has more strength: a meat eater or a vegan/vegetarian?

The data on whether vegans or meat eaters are stronger is decidedly mixed. A popular but controversial study from the Medical University of Graz called meat eaters not only physically stronger, but mentally stronger, too. Yet vegan weightlifter Barnabas du Plessis later became PETA’s spokesperson, proving that vegans can be quite strong.

In this article, we’ll explore in more depth both the cases for and against vegans being stronger. We’ll even provide some tips for bulking up your body should that be one of your goals. Keep reading!

The Case for Meat Eaters Being Stronger

First, let’s talk more about the study that alleges that meat eaters are the stronger of the two groups. This comes from Austria’s Medical University of Graz and was published in 2014. In the study, 1,320 participants were involved. Up to 330 of them ate a lot of meat and 300 ate meat but not as much as the prior group. There was also a middle ground, with 330 people that consumed “a lot” of vegetables and fruits but meat as well. The remaining 330 participants were exclusively vegetarians.

What was gained from the study is as follows:

Now, the study included Austrian residents only. Still, the findings are shocking, especially this line in particular: “Our study has shown that Austrian adults who consume a vegetarian diet are less healthy (in terms of cancer, allergies, and mental health disorders), have a lower quality of life, and also require more medical treatment.”

There are, as you can see, several flaws in this study. For one, there were a lot of meat-eating groups: frequent meat eaters, moderate meat eaters, and rarer meat eaters. Yet there was only one group of vegetarians, and the Medical University of Ganz didn’t even bother assessing any vegans.

There were also 1,320 participants in all, yet only 330 were vegetarians. That means you have 990 meat eaters. Of course it’s easier to conclude data when you have uneven sample sizes like that. If the study had included 300+ vegans, then the data would have been a little fairer.

Besides that, for a report that’s trying to determine whether vegans/vegetarians or meat eaters are stronger, the data goes off the rails a little. It’s certainly not universally true that all vegans and vegetarians don’t see their doctor or get vaccinated. That could have just been the vegetarian sample size for this study only.

It’s a strange study for sure, but it became so infamous because of the data within.

The Case for Vegans Being Stronger

All this talk about having a leaner body index like in the last study may make people think that vegans are weak and scrawny. Then someone like Barnabas du Plessis comes along. As this UK Telegraph article from 2016 mentions, du Plessis does not eat dairy, eggs, fish, or meat, yet he’s a renowned bodybuilder. He looks incredibly strong and muscular, and he’s a vegan.

Now, he wasn’t always vegan, having only made the lifestyle shift a year prior to the article being published. Still, it’s quite telling that a one-time Mr. Universe has tried a vegan diet and says he feels better for it.

As du Plessis says in the article: “The thing about protein…is that on a molecular level, it makes no difference where it comes from. The body doesn’t discriminate between animal and plant-based sources, so building muscle on a vegan diet is easy.”

That’s quite a far cry from the findings in the Medical University of Graz study. The Telegraph piece also goes on to mention Serena Williams (tennis), David Carter (NFL player), and Patrik Baboumian, three renowned athletes who all eat a vegan diet. In fact, Baboumian is quite noteworthy, as he’s smashed several world records in weightlifting, yet the German-based strongman is a vegan.

How to Improve Your Strength

It’s safe to say that whether you eat meat, you’re a vegetarian, or a vegan, you can still be strong. It’s like Barnabas du Plessis says, plant-based or animal-based proteins don’t seem to matter as long as your body is getting protein.

If you’re looking to improve your strength, it’s all a matter of diet and exercise. Whole foods are some of the best for developing muscle and toning your body. It’s ideal to avoid food loaded with preservatives and additives as well as fried foods, salty foods, processed flours, and excess sugar.

On the note of diet, some weightlifters and other aspiring strongmen (and women) take supplements like creatine. If you’re not familiar, creatine is a type of amino acid that enhances muscle mass. Our bodies can produce creatine, but only to a certain degree. If you want even bigger muscles, a supplement like this might be a good place to start.

Having big muscles does not necessarily make one strong, though. That comes from putting in the work at the weight room, be that at your local gym or at home. Here are some exercises you can begin incorporating into your routine to increase your strength:

While an Austrian study from 2014 proclaimed that meat eaters were stronger and even more mentally sound than plant eaters, we don’t quite agree. There are a lot of bodybuilder vegans who have beaten world records, proving vegans can be even stronger than their meat-eating counterparts.

Diet is important in building strength, in that you must eat healthy. That’s possible for meat eaters and vegans alike.