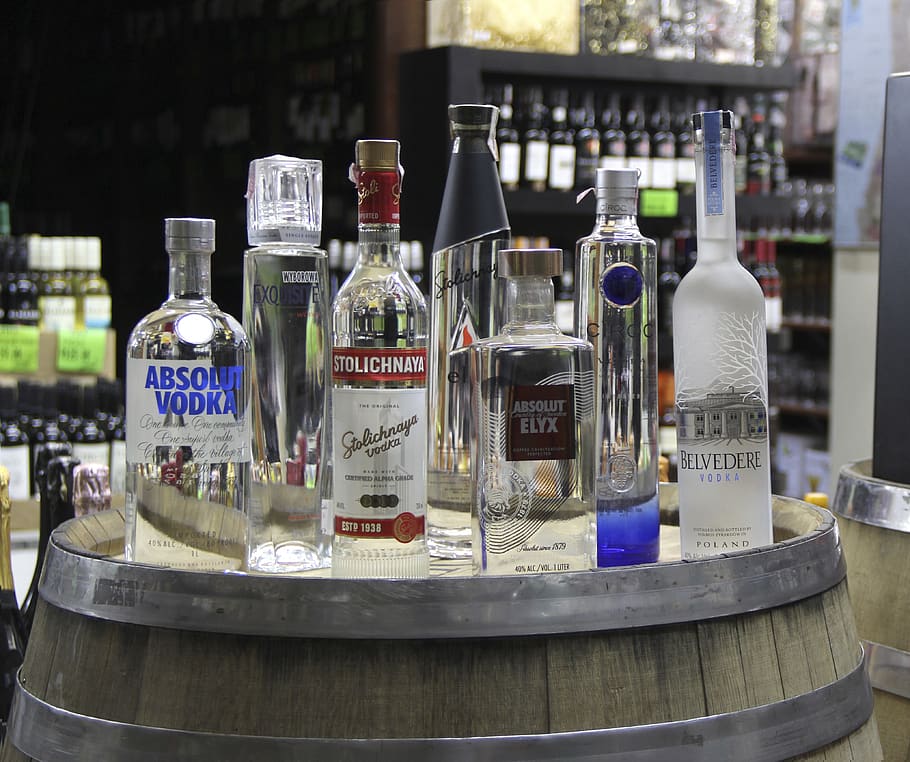 Whether you’re celebrating a large milestone, partying with friends, or simply unwinding after a long week, an occasional spirit or two is the perfect way to do it. As a vegan, you’ve already amended your diet, but do you have to change your drinking habits too? Can you have vodka, whiskey, gin, or rum as a vegan?

Vegans are safe to drink hard liquors such as vodka, whiskey, gin, and rum. Even bourbon and brandy aren’t off-limits. Do make sure to check your ingredients label though, avoiding spirits with honey or cream liqueurs.

In this article, we’ll cover the most popular types of hard liquor, sharing the ingredients in each so you can decide which ones are appropriate for you to enjoy as a vegan. You’re not going to want to miss it!

Vodka is a distilled spirit that hails from such places as Sweden, Russia, and Poland. Plentifully available at any liquor store, vodka brands are a dime a dozen. Although all manufacturers don’t make their vodkas the same, here are the primary ingredients in vodka.

The cereal grains in vodka are fermented to lend the spirit its distinct flavor. When we say cereal grains, by the way, we don’t mean Frosted Flakes ore Lucky Charms. Instead, cereal grains are produced from maize, sorghum, triticale, rye, oats, barley, rice, millet, wheat, and other grasses.

Given the plant-based nature of these ingredients, cereal grains are safe for vegans. Some vodka brands do exchange the cereal grains for potatoes, which are also allowable as part of the vegan diet.

A type of organic chemical compound, ethanol is alcohol with no color. Found in such spirits as brandy, wine, beer, and vodka, ethanol acts as a solvent, allowing for organic chemicals in the spirit to synthesize.

The last ingredient in vodka is water. Yes, good ol’ H2O. There’s nothing to worry about here for vegans!

What if you’re more of a whiskey lover? Can you drink that as a vegan? To answer your question, let’s more closely examine the ingredients of whiskey.

The main ingredient of whiskey is fermented grain mash. Rather than use one grain like vodka, whiskey requires several grains. Before they’re mashed, they may undergo malting, or germinating the grain and then drying it out.

The most popular grains for whiskey mash are wheat, rye, corn, and barley. Whiskey then is also acceptable for vegans to drink.

Once the ingredients are gathered, they undergo a period of aging and distillation in a wooden cask or barrel. Most barrels are charred white oak so whiskey has that reliable kick people so love it for.

Another spirit you might be curious about is gin, which began as a type of medicinal treatment in the early days of alchemists and monks in Europe. Today, gin is appreciated for its variety of flavors, which can vary depending on the ingredients used during production.

So what’s in gin? We’re glad you asked. Here’s what you need to know.

Most gins are made from Juniperus communis or juniper berries. Despite the name, juniper berries aren’t considered real berries. Instead, they’re conifer cones. The blueberry-like look of a juniper berry may suggest this fruit is sweet, but it instead imparts a spicy flavor that makes it great for gin.

Most juniper berries are edible save for the Juniperus sabina. Other edible juniper berries have a very strong bitter flavor so they’re unappealing for snacking on. They could be used in gin though.

To differentiate themselves from their competitors, some gin manufacturers will use botanicals over juniper berries. Depending on the botanical used, the gin might take on a fruiter flavor, a more floral one, or an herbal taste.

Like with vodka, ethanol is also used in gin.

Vegans who want to enjoy gin should have no reservations given the spirit’s plant-based ingredients. Do keep in mind though that gin-based liqueurs are not the same as straight gin. These liqueurs usually have sugar and artificial flavorings that vegans might not necessarily be allowed to ingest.

If you prefer your spirits a bit sweeter, then you likely quite appreciate a nice shot of rum. Let’s wrap up by taking a closer look at the ingredients in rum.

The distillation process that whiskey undergoes is not all that different from how rum is manufactured. A sweet ingredient such as sugarcane juice is combined with a liquid and then left to mature in an oak barrel.

Sugarcane juice consists of lemon juice, lemon, ginger, and sugar. None of those ingredients are disallowable on a vegan diet.

If sugarcane juice isn’t the primary ingredient of rum, the alternative would be sugarcane molasses. To make this molasses, you need sugar beet juice or sugar cane, which you should boil. The sugar becomes a syrup. Then it’s just a matter of scraping the sugar crystals so only the molasses remains.

Whether your tastebuds light up for vodka, whisky, gin, or rum, all are fine for vegans to consume. As when drinking any alcohol, always do so in moderation and be responsible!