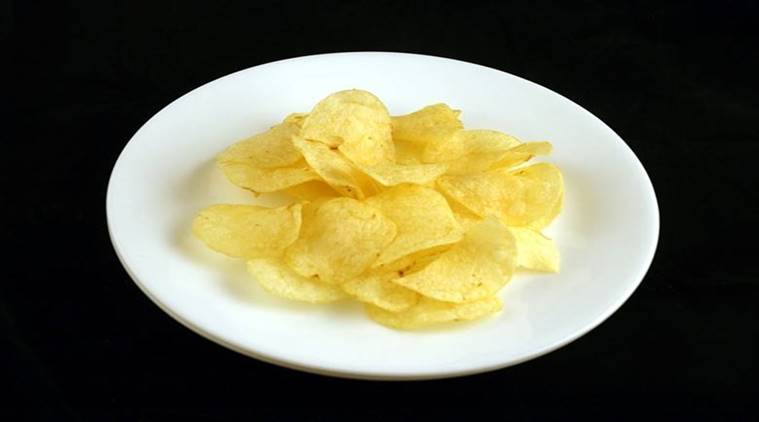 If you need a midday snack or a side with your lunch, a bag of chips satisfies. The crispiness of the potatoes, the crunch of the chips, the flavoring, it all adds up into one tasty little treat. If you’re on a vegan diet, you might wonder if you’ll have to give up chips. Are they considered vegan? Can vegetarians eat chips?

Both vegans and vegetarians can eat chips, although vegans will have to carefully read the ingredients list before busting into a bag. Fortunately, a whole laundry list of chip brands is vegan, including Sun Chips, Earth Balance, and even Pringles and Doritos.

In today’s post, we’ll examine the most common ingredients in chips, discuss whether consuming chips fit into a vegan and/or vegetarian diet, and cover some more vegan chip brands. Make sure you keep reading!

First thing’s first, what’s in that bag of potato chips, anyway? Although primarily made of potatoes, that’s far from the only ingredient you’ll find if you inspect the labeling on the side of your chip bag.

Of course, which ingredients your chips contain depends on the variety, brand, and flavor. According to the U.S Food & Drug Administration or FDA, the ingredients in “traditional potato chips” may include:

Let’s break down what some of those ingredients are, shall we?

An emulsifier is a type of additive that allows liquids to combine. The most classic example is oil and water, which usually do not mix. With an emulsifier, they can.

The acid salt known as sodium bisulfate isn’t for flavoring, but rather, for controlling the pH of other ingredients. Those who own hot tubs and swimming pools likely use sodium bisulfate to reduce the water’s pH after chlorinating.

Food-grade sodium phosphate can also adjust pH as well as emulsify, act as a leavening agent, or thicken food.

You’re probably surprised to hear that chips have antioxidants, but it’s true! Granted, these aren’t naturally-occurring, as the antioxidants are added to the chips during production so they can store longer. The inclusion of antioxidants also makes the chips slightly more nutritious.

Those ingredients, although not necessarily healthy for you, aren’t disallowed on a vegan diet. As a refresher, the vegan diet excludes meat, poultry, dairy, eggs, fish, shellfish, honey, and other animal byproducts.

Some vegans take even stricter protocols for their diet, omitting foods that may use animal products or byproducts during production. We discussed this in a recent post, but here are a few examples. Some cake mixes may contain beef products and beer has isinglass from fish bladders.

Thus, even though you’re okay to eat chips as a vegan, like we said in the intro, it’s always a good idea to give the ingredients label a thorough inspection before you start munching. Be aware that some chips may have food coloring or other ingredients that, while not technically non-vegan, do give some vegans pause.

Perhaps you’ve just decided to omit meat and fish, but you’re still consuming dairy, eggs, and animal byproducts like honey as part of a vegetarian diet. If vegans can safely eat chips, then so can you as a vegetarian.

You’re not likely to find any poultry, fish, or meat ingredients in a bag of chips, even if sometimes the chips may be flavored as such. If you take a hardline stance on consuming animal products and byproducts like some vegans do, then we again caution you to read the chips ingredients carefully before consumption.

Which Chips Are Vegan?

Vegans often have to start buying substitutes of certain foods so they’re meat-free or dairy-free. This can be isolating and expensive. It’s always nice when you can enjoy the same versions of food as your non-vegan friends and family. With chips, you have that freedom.

Popchips, a low-fat chip brand, produces several flavors of chips that are vegan-friendly. These include Original Sea Salt Potato, and–if you want some variety–Sweet Potato.

This is another non-potato chip to try, Santitas’ Totopos de Maiz tortilla chips made with natural vegan ingredients.

You might steer clear of any chip flavors as a vegan, but that’s not always necessary. Zapp’s Voodoo Potato Chips include a variety of spices, none of them concerning for vegans. Eat away!

Kettle-cooked chips are also something you can continue eating as a vegan. The Kettle Brand has a whole laundry list of delectable, vegan-friendly chips to sample, including Sea Salt & Vinegar, Backyard Barbeque, and Maple Bacon.

Earth Balance is a plant-based food manufacturer that makes, of all things, chips. They too specialize in kettle chips, including their Sour Cream & Onion and Vegan Cheddar flavors.

Yes, we’re serious. You can eat Pringles as a vegan, but we recommend sticking with the Tangy Buffalo Wing flavor. It’s vegan-safe and super flavorful. What more can you ask for?

Those addictive ridges can be yours. Ruffles are vegan, including the Original and All Dressed flavors, the latter of which has a great barbeque taste.

The classic corn chip brand Fritos is also fine to add to your shopping cart. These bite-sized corn chips go great with vegan chili or dip!

We saved the best for last. Most Doritos are vegan, including their stronger flavors like Spicy Sweet Chili.

Vegans and vegetarians alike can bust open a bag of potato chips at a party or simply when you’re in the mood to. Since most chips consist of ingredients like potato, emulsifier, preservatives, salt, and antioxidants, they’re safe to consume on a specialized diet. Why not snack on some chips today?